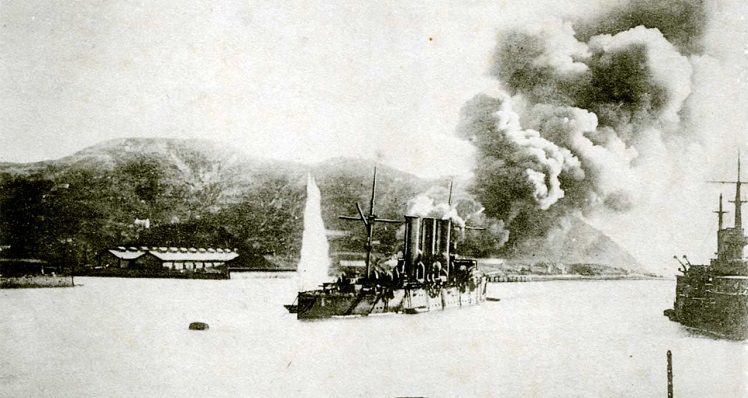 The Battle of Port Arthur of 8–9 February 1904 marked the commencement of the Russo-Japanese War. It began with a surprise night attack by a squadron of Japanese destroyers on the neutral Russian fleet anchored at Port Arthur, Manchuria, and continued with an engagement the following morning; further skirmishing off Port Arthur would continue until May 1904. The attack ended inconclusively, though the war resulted in a decisive Japanese victory.

The Imperial Japanese Navy launched preemptive strikes on the Russian Pacific Fleet located at Port Arthur and Chemulpo in the early stages of the Russo-Japanese War. Admiral Tg's first plan was to attack Port Arthur with the Combined Fleet's 1st Division, which included the six pre-dreadnought battleships Hatsuse, Shikishima, Asahi, Fuji, and Yashima, led by the flagship Mikasa, and the 2nd Division, which included the armored cruisers Iwate, Azuma, Izumo, Yakumo, and Tokiwa. 15 destroyers and roughly 20 smaller torpedo boats escorted these big ships and cruisers. The cruisers Kasagi, Chitose, Takasago, and Yoshino were in reserve. Admiral Tg wanted to strike the Russian fleet with this massive, well-trained, and well-armed force, and with surprise on his side, soon after the Japanese and Russian governments severed diplomatic relations.

Admiral Starck's Russian forces included the pre-dreadnought battleships Petropavlovsk, Sevastopol, Peresvet, Pobeda, Poltava, Tsesarevich, and Retvizan, as well as the armored cruiser Bayan and the protected cruisers Pallada, Diana, Askold, Novik, and Boyarin, all based within the fortified naval base of Port Arthur. The defenses of Port Arthur, however, were not as strong as they could have been because few of the shore artillery batteries were operational, funds for improving the defenses had been diverted to nearby Dalny, and the majority of the officer corps was celebrating at Admiral Starck's party on the night of February 9, 1904.

Admiral Tg was unwilling to entrust his valuable capital ships to Russian shore fire after receiving false information from local spies in and around Harbour Arthur that the garrisons of the forts surrounding the port were on high alert. Instead, the destroyer force was divided into two attack squadrons, one for Port Arthur and the other for the Russian port at Dalny.

The Port Arthur attack squadron of ten destroyers intercepted patrolling Russian vessels at 22:30 on Monday, February 8, 1904. The Russians were instructed not to engage in combat and instead turned to report the contact to command. However, as a result of the collision, two Japanese destroyers collided and fell behind, scattering the rest of the fleet. The first four Japanese destroyers arrived in Port Arthur at 00:28 on February 9th, unnoticed, and started a torpedo attack against the Pallada (which was hit amidships, caught fire, and keeled over) and the Retvizan (which was holed in her bow). The other Japanese destroyers had less success; several of their torpedoes got snagged in the enlarged torpedo nets, essentially preventing most of the torpedoes from impacting the Russian battleships' vitals. Other destroyers came too late to take advantage of surprise, so they attacked on their own rather than in a group. They did, however, manage to damage the Russian fleet's most powerful ship, the battleship Tsesarevich. The last attack was launched by the Japanese destroyer Oboro about 02:00, when the Russians were fully awake and their searchlights and gunfire rendered precise and close-range torpedo attacks impossible.

Even though the settings were favorable for a surprise attack, the outcomes were disappointing. All but three of the sixteen torpedoes fired either missed or failed to explode. Two of the three torpedoes hit the Russians' greatest battleships, the Retvizan and the Tsesarevich, as well as the protected cruiser Pallada, putting them out of commission for weeks.

Admiral Tg dispatched his lieutenant, Vice Admiral Dewa Shiget, with four cruisers on a reconnaissance mission at 08:00 to investigate the Port Arthur anchorage and assess the damage. Admiral Dewa had gotten close enough to see the Russian fleet through the morning mist around 09:00. He saw 12 battleships and cruisers, three or four of which appeared to be aground or seriously listing. Outside the harbor entrance, the smaller vessels appeared to be in chaos. Dewa approached the harbor at about 7,500 yards (6,900 meters), but because no Japanese ships were seen, he assumed the night attack had successfully immobilized the Russian fleet and hurried off to report to Admiral Tg.

Unaware that the Russian navy was preparing for battle, Dewa pushed Admiral Tg to attack the main fleet as soon as possible. Despite Tg's preference for drawing the Russian fleet away from the shore batteries' protection, Dewa's overly optimistic calculations meant that the risk was warranted. The First Division was instructed to attack the harbor, with the Third Division in reserve in the rear.

The Japanese encountered the Russian cruiser Boyarin, which was on patrol, as they approached Port Arthur. Boyarin fired a long-range shot at the Mikasa before turning and retreating. The Japanese and Russian fleets engaged in action around 12:00, at a range of around 5 miles. The Japanese used their 12" guns to target the shore batteries, while their 8" and 6" guns targeted the Russian ships. Both sides shot poorly, but the Japanese seriously damaged the Novik, Petropavlovsk, Poltava, Diana, and Askold battleships. Admiral Dewa, on the other hand, quickly realized that he had made a fatal miscalculation; the Russians had recovered from the initial destroyer onslaught and were steaming up their battleships. Mikasa was damaged by a ricocheting shell in the opening five minutes of the action, wounded the chief engineer, flag lieutenant, and five other officers and men, and destroying the aft bridge.

Admiral Tg made the decision to depart at 12:20. The fleet was exposed to the full force of the Russian shore artillery as a result of this dangerous move. Despite intense fire, the Japanese battleships performed the maneuver and quickly sped away. The Shikishima, Mikasa, Fuji, and Hatsuse all took hits, totaling seven hits. As they approached the turning point, several strikes were made on Admiral Kamimura Hikonoj's cruisers. In exchange, the Russian battleships Petropavlovsk, Pobeda, Poltava, and Sevastopol had sustained around 5 hits. At the same time, the cruiser Novik approached the Japanese cruisers within 3,300 yards (3,000 meters) and unleashed a torpedo volley. All of them missed, despite the fact that the Novik had taken a direct blow below the waterline.

Despite the fact that no large warships were lost in the naval Battle of Port Arthur, the IJN was pushed off the battlefield by the combined fire of Russian battleships and shore batteries, giving them a slight win. The Russians suffered 150 casualties, while the Japanese suffered roughly 90. Despite the fact that no ships were sunk on either side, several were damaged. The Japanese, on the other hand, possessed ship repair and drydock facilities in Sasebo, whilst the Russian force only had a limited repair capabilities in Port Arthur.

Admiral Dewa had clearly failed to press his reconnaissance hard enough, and Admiral Tg's resistance to engaging the Russians behind their shore guns was warranted once the exact situation was revealed.

A day after the fight, on February 10, 1904, Japan and Russia announced a formal declaration of war. The attack, which took place in peacetime against a mostly unassuming and unprepared neutral state, has been compared to the 1941 attack on Pearl Harbor.

The Second Hague Conference enacted measures on neutral powers' rights and obligations on land and sea in 1907, forbidding governments from committing acts of hostility against neutral countries or persons and needing a declaration of war before attacking a targeted party.

The Russian minelayer Yenisei began mining the Port Arthur entrance on Thursday, February 11, 1904. One of the mines washed up against the ship's rudder, exploding and sinking the ship, killing 120 of the ship's 200 crew members. The only map detailing the location of the mines was also lost with the Yenisei. The Boyarin, which had been dispatched to investigate the catastrophe, struck a mine and was forced to abandon ship, albeit remaining afloat. After hitting a second mine, she sank two days later.

On Sunday, February 14, 1904, Admiral Togo set sail from Sasebo with all ships save Fuji. An attempt was made on the morning of Wednesday, February 24, 1904, to destroy five decrepit transport vessels in order to block the entrance to Port Arthur and seal the Russian fleet inside. Retvizan, which was still stranded outside the harbor, ruined the plot. The Russians mistaken the antiquated transports for battleships due to the bad lighting, and Viceroy Yevgeni Alekseyev telegraphed the Tsar of his tremendous naval triumph. A second message was required after daylight showed the truth.

Russian Admiral Stepan Makarov arrived in Port Arthur on Tuesday, March 8, 1904, to take command from the unlucky Admiral Stark, boosting Russian morale. He raised his flag above the Askold, which had recently been repaired. The Russian fleet went on the offensive on Thursday, March 10, 1904, and attacked the blockading Japanese squadron, although with little success. The Japanese tried a ploy by sending four destroyers near to the harbor on the evening of March 10, 1904. The Russians took the bait and dispatched six destroyers to pursue them, prompting the Japanese to mine the harbor entrance and position themselves to prevent the destroyers' return. Despite Admiral Makarov's efforts to save them, two of the Russian destroyers were destroyed.

On March 22, 1904, the Russian fleet led by Admiral Makarov attacked Fuji and Yashima, forcing Fuji to retire to Sasebo for repairs. The Russian fleet became more confident and well-trained under Makarov's command. Tg responded by attempting to blockade Port Arthur once more on Sunday, March 27, 1904, this time with four more old transports loaded with stones and concrete. The attempt failed once more because the transports were sunk too far from the harbor's entrance.

Makarov (who had now changed his flag to Petropavlovsk) departed port on the 13th of April 1904 to assist a destroyer squadron he had dispatched north to Dalny on reconnaissance. The Russian cruisers Askold, Diana, and Novik, as well as the battleships Poltava, Sevastopol, Pobeda, and Peresvet, accompanied him. Makarov retired to the safety of the shore artillery at Port Arthur as the Japanese fleet approached. However, the Japanese had recently mined the region. Petropavlovsk hit three mines at 09:43, exploded, and sank within two minutes. Admiral Makarov was among the 635 officers and sailors killed in the disaster. Pobeda was likewise disabled by a mine at 10:15. Admiral Togo ordered that all flags be flown at half mast the next day, and that a day of mourning be marked for his fallen foe. On 1 April 1904, Makarov was replaced by Admiral Nikolai Skrydlov; but, due to the Japanese blockade, Skrydlov was unable to reach his command and remained in Vladivostok, overseeing command of the Vladivostok cruiser squadron, until summoned to St Petersburg on 20 December.

Admiral Togo attempted a third and final time to block the entrance to Port Arthur on May 3, 1904, this time with eight outdated transports. Although this operation failed, Togo declared it a success, paving the door for the Japanese Second Army to land in Manchuria. Despite the fact that Port Arthur was effectively sealed, due to Makarov's successors' lack of action, Japanese naval casualties began to increase, primarily due to Russian mines. Two Japanese battleships, the 12,320-ton Yashima and the 15,300-ton Hatsuse, sank in a Russian minefield at Port Arthur on 15 May, destroying one-third of Japan's battleship force and marking the deadliest day for the Japanese Navy throughout the war.

The Russians attempted two break-outs after more naval operations from Port Arthur. The first took place on June 23, 1904, and the second on August 10, 1904, with the latter resulting in the tactically inconclusive Battle of the Yellow Sea. The Russian fleet did not attempt to break free from their port again after that, while the Japanese fleet dominated the waters for the rest of the war. However, mines planted by Russian minelayers were a constant source of loss for the IJN. The 2,150-ton gunboat Heien perished on September 18, 1904, after colliding with a Russian mine west of Port Arthur. The 2,440-ton cruiser Saien sank in the same Russian minefield on 30 November, while the 4,160-ton cruiser Takasago sank a few miles south of Harbour Arthur on 13 December while providing naval gunfire support to the Japanese soldiers besieging the port.